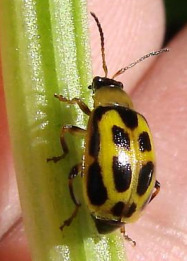 Experienced vegetable gardeners are familiar with a beetle pest called a bean leaf beetle and know only too well this pesky insect will arrive on announced if you decide to grow any crop from the bean family.

Bean leaf beetles are approximately 1/4 inch long and are oval shaped. Their color can range from golden brown to green and they usually have four black spots on their wing covers behind their head with a black band surrounding the outer edge. But the most reliable characteristic of a bean leaf beetle that distinguishes it from other

beetle species, is a black triangle between the neck and wing covers.


Before we go any further discussing this garden pest, let's not be "too quick on the draw" to rid your crops of any beetle you see. What we don't want to do is mistake a ladybird beetle as a bean leaf beetle or any other beetle pest.

After crop growing season is over, adult bean leaf beetles overwinter in plant debris, weeds, or near farm fields that had alfalfa or beans planted in them from the previous year. When the weather warms up in early spring, they become active and begin feeding on clover and prairie legumes until their host plant emerges from the soil and begin to grow. This is also a time for mating and the bean leaf beetle may lay up to several hundred eggs in the soil at the base of a bean plant. When the eggs hatch the larvae will feed on the bean roots for two to three weeks and then enter a final stage and pupate. When they emerge they are a fully developed adult beetle.

Are They a Garden Pest or a Nuisance?

When spring rolls around beetles like most garden insects are on the move scouting your garden for host plants, and in the case of bean leaf beetles their choice of garden plants consist of bush and pole beans, snap beans (also called green beans or string beans), peas, lima beans, cow peas, and even sweet corn.

As with most garden pests they feed on the underside of leaves creating a round 1/8 inch diameter holes. New leaf growth is their preference but they will also eat any host plant leaf they come across including stems of young plants. Even the outer surface of bean pods is sometimes a munchie when vegetative growth ends. However, not all holes you see in plant leaves are a result of this beetle pest. A caterpillar is also known to do their dirty work on your leaves as well. You can easily distinguish between these two insect pests from the pattern of the holes. A bean leaf beetle leaves small rounded holes whereas a caterpillar will consume the plant leaf beginning at the outer edge and leaving a ragged edge design.

Despite their active feeding on your bean plants, bean leaf beetles are not known to seriously damage your crops provided no more than twenty percent of foliage is eaten. Also worth noting, plant leaves can tolerate many holes without a reduction in pod production.

So, are bean leaf beetles a garden pest or a nuisance? I'll let you be the judge.

Bean leaf beetles can be a problem in one year but hardly noticeable in other years. But if you have experienced bean leaf infestation in the past you should be on the lookout in the coming year for their presence and feeding damage. If you find only a few beetle pests scattered here and there then there is usually no problem. On the other hand, if there is moderate to severe damage (about six to ten beetle holes per leaf) on ten percent of your crops immediate action is required.

Because of the high mobile nature of beetle pests, controlling them is difficult. However, you can discourage overwintering beetles by removing plant debris and keeping vegetation mowed in the vicinity of your vegetable garden. If you have a small crop garden and most of us do, either hand-pick any beetle you see or position a white bed sheet (cut to size) below your plants and give the plant a shake. Any beetles you don't see should fall off on to the sheet to be disposed off into a pail of soapy water, where they will meet their demise.

I do discourage the use of insecticides (it defeats the purpose of growing your own garden), but if you must, use a low rate of Sevin approximately 1/2 tablespoon per gallon of water.

May I say to beginner gardeners, yes growing a vegetable garden is work (but just think of the exercise you're getting), and you can't beat the tranquility and satisfaction you receive while puttering about tending to your crops. This is your opportunity to escape much of the stress life throws at you and frankly speaking, I love my garden and wouldn't have it any other way.

I hope you found this article on beetle pest informative.

Return to Top of Page